While most companies have cut back on newspaper and Yellow Page advertising because of the economic downturn, an increasing amount of advertising dollars that are being spent are going to the online search engine Google.

Much of Google’s success is fueled by small businesses. Take Bananas at Large, a music store in San Rafael, Calif., that sells pianos, amps, guitars and just about anything a musician might need.

According to J.D. Sharp, who handles sales and marketing for the store, Bananas isn’t advertising in the local paper or the Yellow Pages. Instead, Sharp says, someone looking for a guitar is more likely to go online and use Google.

“It’s the new Yellow Pages,” he explains. “I know that if they’re located in this county and they’re looking for a guitar and they put in ‘guitar, Marin County’ or something (like) that, that’s a search that’s worth paying for.”

The power of Google’s online advertising, also known as “AdWords” or “PPC” (pay-per-click) is that small business owners can control who was sees their ads by using key words like ‘Gibson guitars’ and much more specific (terms).

Google wants Bananas to find the right key words because they want the ads on their site to be relevant and not annoying; when customers are looking for electric guitars, Google doesn’t want them to see ads for wrinkle cream and flowers. No matter how much an advertiser is willing to pay, Google won’t put up an ad when it isn’t related to a specific search. In fact, Bananas pays Google only when someone actually clicks on its ad.

Google also allows small businesses to write and display multiple ads to see which gets the best results. So, they can test ad headlines that says “Guitars in Marin” and another that says “Bay Area Electric Guitars” and Google will tell the store which one gets more clicks.

It isn’t just small businesses that are flocking to Google — even the struggling automakers are spending a larger portion of their budgets on Google. Matt Van Dyke who heads up U.S. marketing for Ford Motor Co. says the company is one of the automaker’s most important outlets because that is where customers are researching cars.

“In an era where marketing budgets are under pressure, search is a pretty powerful tool,” says Van Dyke. 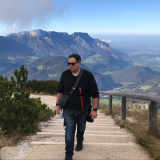